Perhaps the most striking health benefit provided by quinoa is its overall nutrient richness. When the nutrient composition of this food is analyzed in depth, the results are unusual and striking. While quinoa can be eaten in the same way as a grain, or ground into flour like is so commonly done with grains, it lacks some important nutritional shortcomings of grains. 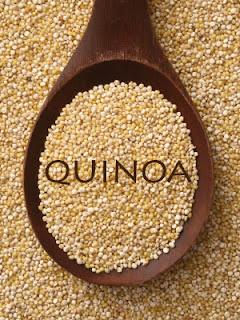 In terms of fat content, quinoa once again overcomes some of the shortcomings of most grains. Since it takes nearly 350 calories' worth of whole wheat to provide 1 gram of fat, whole wheat is not generally regarded as a significant source of fat, including essential fatty acids or heart-healthy monounsaturated fats (like oleic acid). By contrast, since it only takes 63 calories' worth of quinoa to provide 1 gram of fat, quinoa is typically considered to be a valuable source of certain health-supportive fats. About 28% of quinoa's fatty acids come in the form of oleic acid, a heart-healthy monounsaturated fat, and about 5% come in the form of alpha-linolenic acid or ALA—the omega-3 fatty acid most commonly found in plants and associated with decreased risk of inflammation-related disease.

Neither quinoa nor any grains qualify as good vitamin E sources in our WHFoods rating system. However, in the case of quinoa, or rating system does not do full justice to the fact that quinoa contains significant amounts of certain tocopherols (vitamin E family members) largely absent from most grains. For example, one cup of quinoa provides 2.2 milligrams of gamma-tocopherol—a form of vitamin E that has been more closely associated with certain anti-inflammatory benefits in health research. Quinoa is also a good source of RDA nutrients like folate, zinc, and phosphorus in contrast to whole wheat, which does not qualify as a good source in our rating system.

Considered in combination, these diverse nutrient benefits of quinoa give it uniqueness among grain-related foods. For us, this high overall level of nourishment provided by quinoa may qualify as its greatest health benefit.

Because quinoa is typically consumed in the same way as the cereal grasses (wheat, oats, barley, and rye), we group it together with those foods on our website. However, quinoa is not a cereal grass at all, but rather a member of the same food family that contains spinach, Swiss chard, and beets. Many researchers refer to quinoa as a "pseudocereal." This term is typically used to describe foods that are not grasses but can still be easily ground into flour. The scientific name for quinoa is Chenopodium quinoa.

How to Select and Store

Quinoa is generally available in prepackaged containers as well as bulk bins. Just as with any other food that you may purchase in the bulk section, make sure that the bins containing the quinoa are covered and that the store has a good product turnover so as to ensure its maximal freshness. Whether purchasing quinoa in bulk or in a packaged container, make sure that there is no evidence of moisture. When deciding upon the amount to purchase, remember that quinoa expands during the cooking process to several times its original size. If you cannot find it in your local supermarket, look for it at natural foods stores, which usually carry it.

The most common type of quinoa you will find in the store has an off-white color but red and black quinoa are becoming more available. You may even be able to find a tri-color mixture sold in packages or bulk bins.

Store quinoa in an airtight container. It will keep for a longer period of time, approximately three to six months, if stored in the refrigerator.

Processing methods used in the commercial milling of quinoa usually remove most of the saponins found in the outer coat of the quinoa seeds. Because the quinoa saponins are largely responsible for its bitter taste, many people chose to rinse and rub the seeds after purchase to remove any bitter taste that may remain in the seeds. An effective method to do so is to place the quinoa seeds in a fine-meshed strainer and run cold water over the quinoa while gently rubbing the seeds together in your hands. After completing this process, you can taste a few seeds to determine if a bitter taste remains. If it does, simply continue this rinsing and rubbing process until you no longer taste a bitter residue.


The Healthiest Way of Cooking Quinoa

To cook the quinoa, add one part of the grain to two parts liquid in a saucepan. After the mixture is brought to a boil, reduce the heat to simmer and cover. One cup of quinoa cooked in this method usually takes 15 minutes to prepare. When cooking is complete, you will notice that the grains have become translucent, and the white germ has partially detached itself, appearing like a white-spiraled tail. If you desire the quinoa to have a nuttier flavor, you can dry roast it before cooking; to dry roast, place it in a skillet over medium-low heat and stir constantly for five minutes.

Quinoa is a perfect food to include on a gluten-free diet, since it not only lacks gluten but doesn't even belong to the same plant family as wheat, oats, barley, or rye. Some studies also show quinoa flour to have higher-than-expected digestibility. Both of these factors would be expected to decrease the risk of an adverse reaction to quinoa—especially in comparison to a cereal grass like wheat. While it is possible to make baked goods and pastas out of 100% quinoa flour, most companies combine quinoa flour with other flours (like tapioca flour or rice flour) or with oatmeal to produce a lighter texture. (Products made with 100% quinoa flour typically have a heavy and dense texture, sometimes referred to as "truffle-like.") When combined with rice flour or tapioca flour, however, quinoa-based products definitely qualify as gluten-free and should help reduce risk of adverse reactions.

Posted by coffetimeforus at 4:20 AM