How to give up sugar?


The average person takes in 22 teaspoons of sugar daily—more than three times the amount suggested by the American Heart Association. And although it has never been considered a health food, new evidence shows sugar can do even more damage than previously thought, setting you up for obesity, diabetes, and heart disease. But weaning yourself off sugar can be daunting. It's tough to dodge because it hides in so many foods, and it provides an almost addictive buzz, thanks to a surge of the neurotransmitter dopamine after it enters the body. 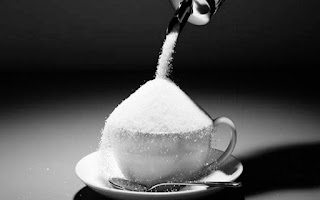 Still, slashing sugar is one food trend worth trying. Find out all about sugar rehab, plus tactics to make your commitment stick.

Your liver does more than filter out your body's toxins—it also plays a vital role for your sugar cravings. A healthy liver plays a key role in regulating blood sugar levels.


Love yourself more than sugar

It's OK to forgive yourself for sugar slip-ups, but remember that, for next time, you can be your own best friend. "Self-oriented compassion is a key part of loving ourselves, inside and out," says Fuhrman. "You may fight yourself on the urge to dive into an entire cheesecake and then feel guilty or shameful because you didn't have the discipline to stop yourself from eating the whole thing—but the truth is, you can love yourself more than you love that quick hit of sugar."

If deprivation diets haven't worked for you in the past (and do they really work for anyone?), change "never" into "sometimes." Just because it's called devil's food cake doesn't mean it's evil.

Recognize if it's sugar addiction

When you eat sugar, your body comes to expect it, and when you don't get it, you crave it. This kind of addiction can't be overcome by willpower alone. It's not willpower. Most people think, 'Oh it's just that I'm weak willed,' but they don't realize that willpower doesn't work because of the biochemistry. It's actually the same brain chemistry as going off of heroin.

Many drinkers think they don't have a sweet tooth; indeed, they are faintly derisive of people who do. In fact, they get all their sugar from alcohol and if they ever gave it a rest for even two days, they would realise they have an incredibly sweet tooth.

You see "fruit" so you think it's healthy, but really, it's just an overhyped source of sugar. Containing neither protein, fat, nor fiber, fruit juice is calorically dense, provides no satiety, and receives 100 percent of its calories from sugar.

Posted by coffetimeforus at 5:37 AM