Himalayan salt is high in sodium chloride and is believed to have a great number of beneficial properties which positively affect the human body, such as relaxation, body detoxification and respiratory support, among the others. 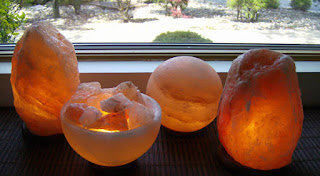 The salt mines of the Himalayan Mountains can be found in the foothills of Pakistan. The salt mines of Khewra are the 2nd largest salt mines in the world producing 325,000 tons annually from 500 feet underground. These mines were created millions of years ago, due to the evaporation of inland sea water, creating salt veins in the mountains.

What is a Himalayan Salt Lamp

It is a large solid salt crystal or it can be chunks of salt crystals displayed in a beautiful salt bowl. The salt is heated by an electrical source like a light bulb or heated with a candle. The warmed salt emits negative ions purifying the air.

Ions can be positive or negative because they are unbalanced molecules. Electrons and neutrons are unequal in ions.

When it comes to ions, positive ions will not create a positive experience. Positive ions are created when microwaves, vacuum cleaners, electrical equipment and air conditioners stir up the air irritating our airways causing coughing and sneezing. Positive ions can also contribute to stress, trouble sleeping, migraines, asthma and other respiratory illnesses. Fortunately a negative ion can unbalance positive ions and purify the air

How does the Himalayan Salt Lamp work

Well, just to start off the salt lamp doesn’t actually create negative ions, but is helps to support the environment for the many negative ions to thrive. The salt naturally attracts the humidity straight from the air. The heat from the bulb heats up the mineral and causes the moisture that is within the salt to start to evaporate which then releases negative ions.

Salt therapy has been practiced in Greece since ancient times. Salt room therapy is a room that has dry- salt- enriched air to be inhaled with natural breathing. It dissolves phlegm, kills microorganisms and reduces inflammation while strengthening the immune system. Even something as simple as gargling salt water can sooth mouth sores or a tender throat, and swimming in the ocean can provide relief from skin rashes.

Himalayan salt lamps have been shown to be helpful with:

These salt lamps have a limited range. Having one in your home is a great thing but it will not impact the air of your entire home. Rather, it will improve the air within the general vicinity of the lamp.

It is important to place the lamp wherever you spend the most time or where your environment is most impacted by electronic devices.

There are many fake salt lamps out there on the market. You will want to be sure you purchase a lamp that is from the Himalayan region that is made from pure Himalayan salt crystals.

Note that your salt lamp may sometimes appear wet or “sweaty.” This is because water is attracted to the surface of the lamp (the salt) and then it evaporates quickly because of the heat from the bulb inside. This evaporation process is what generates the negative ions.

Posted by coffetimeforus at 5:09 AM